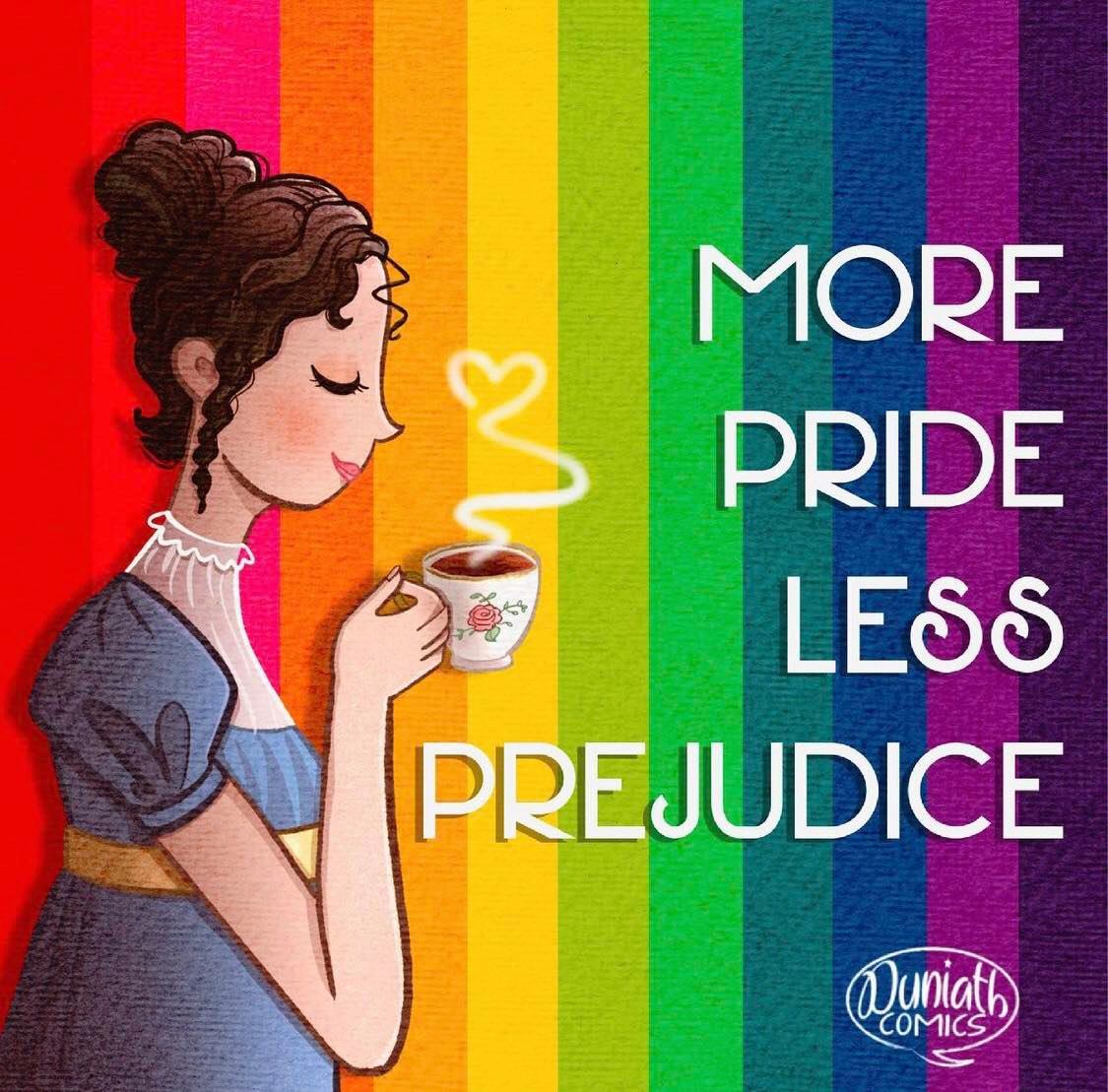 Today I am interviewing Georgie Castilla, a graphic artist that has been so inspired by Jane Austen he was invited to talk about his work at the AGM – biggest Janeite event in the Jane Austen Society of North America. He will also be a member of the VIP membership. Can’t wait!

How did Jane Austen enter your life?

Book! My mom, who has always been into reading the classics, introduced me to Austen when I was 15 or 16 years old. She gave me a copy of Sense and Sensibility, and I loved it.

What’s the coolest thing that has happened to you since you started this Austen adventure?

The adventure itself. I didn’t know I was in it, until a couple of illustrations went viral. The thing is, nothing was planned. I simply made a few doodles, and they took wing on their own. But I’d say the coolest thing has been realizing how diverse, beautiful, and hungry for more Janeites are nowadays.

When did you start drawing Jane Austen and Regency characters and why?

Honestly, I don’t know. I doodle when I’m stressed out, and a lot of times the doodles end up being Regency gowns (a habit I developed during fashion school in Madrid). I consciously started diving into illustrating Austen-related toons and comics in 2019, when I started drafting the idea of adapting Emma to graphic novel, and while writing my original story Garden of the Year.

Tell us about the following gorgeous and touching illustration:

This illustration was commissioned. My dear friend Lena Yasutake of Cassandra’s Closet approached me to collaborate in a campaign to celebrate equity, diversity, inclusion, and accessibility within the JA community. We strongly believe it’s about time to update the image some people have of Austen belonging to a community conformed of mainly white women, and prove that Janeites are indeed much more multicultural nowadays.

This illustration going viral was pure bliss. Jane’s Tea is a design I created for my Redbubble store originally. When Pride Month 2021 came around, I “recycled” Jane and placed her against a rainbow background, and added the quote, and much to my amazement it went viral. Friends and followers started asking for merchandise, and thus this design became my best-seller. Janeites eager to show love and support to the lgbtq+ community with this illustration made it truly special. I love it.

I know you just launched a brand new website. Tell us about it:

I created Duniath Comics in 2018 on Instagram as a personal gallery in which to feature my doodles, since drawing has always been an active hobby of mine. When the collaborations started happening with Teel House, Bingley’s Teas, Cassandra’s Closet, etc. I realized this hobby was indeed the beginning of something a bit bigger, and beautiful. A professional website gives you a sense of stability and permanence that social media accounts can’t. I decided it was time to upgrade from an “online gallery” to a “small business”. There are big things coming up for Duniath Comics in the near future, and I’m thrilled.

How did the invitation to speak at the greatest event of the year for North American Janeites (Annual General Meeting) come about?

A couple of colleagues within JASNA’s EDI Committee, which I’m part of, recommended me to the AGM organizers upon learning they were still looking to fill up a couple of Special Interest Sessions. Since this year’s topic is Jane Austen in the Arts, they considered my work as an artist whose illustrations are Austen-inspired to be a perfect match. I will be talking about Jane Austen in the world of comics, manga, and graphic novels, as I share a bit of my own process of adapting Emma, sketching live! I’m thrilled.

For those who don’t know EDI stands for Equity, Diversity and Inclusion – a committee to make ensure the Jane Austen Society of North America (JASNA) keeps up with the times.

Georgie Castilla was born and raised in Yucatán, México. He has a BFA in Theatre, and an Associate’s Degree in Historical Fashion. He is a freelance comic artist and illustrator on the side, located in the New Jersey/New York area. You can follow him on Instagram @duniathcomics or visit his brand new website at http://duniathcomics.com