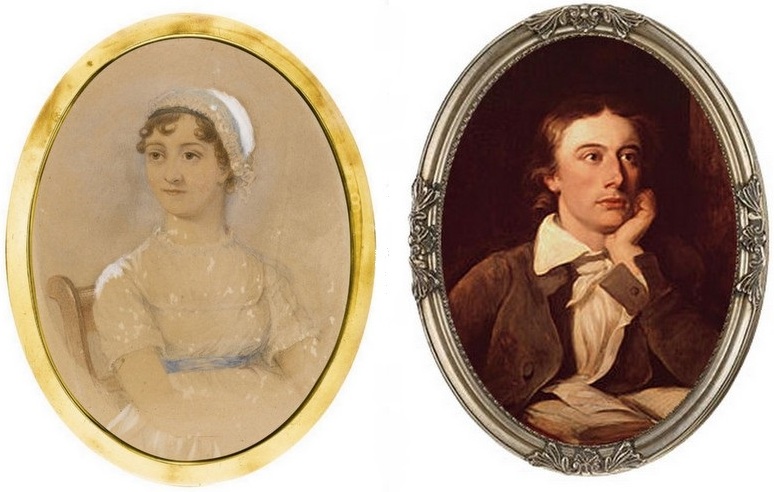 Who was John Keats?

John Keats (31 October 1795 – 23 February 1821) was the latest born of the great Romantic poets. Along with Byron and Shelley, he was one of the key figures in the second generation of the movement, despite publishing his work over only a four-year period. During his short life, his work was not well received by critics, but his posthumous influence on poets such as Alfred Tennyson and Wilfred Owen was significant. The poetry of Keats was characterized by sensual imagery, most notably in the series of odes which remain among the most popular poems in English
literature. The letters of Keats are among the most celebrated by any English poet.

Who was Jane Austen (in case you don’t know…LOL)?

Jane Austen (16 December 1775 – 18 July 1817) was an English novelist known primarily for her six major novels, which interpret, critique and comment upon the British landed gentry at the end of the 18th century. That is the short description you will find on Wikipedia.

Can you see anything they have in common between the two of them?

If you thought they both lived during the Regency Period you are correct. That they read each other’s works it is certain. When Keats was born Jane already was almost 20 years old but he was a prodigy and even though he lived a life even shorter than Jane’s he wrote wonderful poems and inspired so many people and continue to inspire today as our beloved Jane. Read more about these two amazing talents on this link here:
https://www.janeausten.co.uk/john-keats/

What does he have in common with these Keats and Austen? Well, I’m sure you know that he portrayed Captain Wentworth in Persuasion in the BBC production of 2007 – a beloved Austen character. He also recorded  (in his velvety voice) one of Keats most famous poems – Bright Star as you can see and listen on the video below. You can also find the poem below the video so you can read together with him (if you dare…LOL) Enjoy!

“Bright star, would I were stedfast as thou art”

BY JOHN KEATS
Bright star, would I were stedfast as thou art—
Not in lone splendour hung aloft the night
And watching, with eternal lids apart,
Like nature’s patient, sleepless Eremite,
The moving waters at their priestlike task
Of pure ablution round earth’s human shores,
Or gazing on the new soft-fallen mask
Of snow upon the mountains and the moors—
No—yet still stedfast, still unchangeable,
Pillow’d upon my fair love’s ripening breast,
To feel for ever its soft fall and swell,
Awake for ever in a sweet unrest,
Still, still to hear her tender-taken breath,
And so live ever—or else swoon to death.

If you liked Bright Star – the poem you might like (or absolutely adore) the movie made about Keats short life and the love that inspired such poem. An even greater treat if you take pleasure in Regency Fashion like me – what a dreamy (however sad) movie! You should not miss it. Trailer tease below.

Now for the fashion lovers…

That is all for now, little darlings!!!